What a busy week it's been! I have many thoughts, but they are in a jumble! So today I offer a recipe that includes chocolate:

Put the cocoa powder in a mug and pour in boiling water to fill it. Stir until the cocoa is dissolved. Add the tea bag and steep at least 5 minutes--the longer it steeps, the sweeter the tea will taste. Keep a spoon handy to stir up the cocoa, as it will settle to the bottom.

This is delicious, even without sugar. Try it!
Posted by Dimple at 6:32 PM 2 comments:

I learned a song in Girl Scouts ages ago:
"Make new friends, but keep the old,
One is silver and the other gold."

A "gold" friend of mine is almost here. I just spoke with her on the phone, and they're about an hour away. I'm so happy she's coming!

We met in second grade, and now we're both old enough to be grandmothers. We were in Brownies and Girl Scouts together, we went to summer camp together, and we spent nearly every weekend together at one or the other of our homes. Her parents were my second parents, and mine were hers. We have kept in touch. I love that we are still friends.

I have silver friends, too. There are more of them, and they are special to me, but I have very few gold friends like Julie.
Posted by Dimple at 4:45 PM 4 comments: 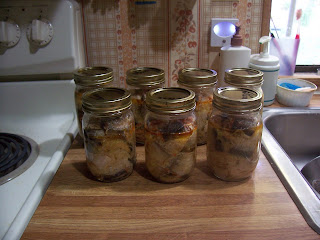 Here they are--seven pints, all sealed and ready to be labeled and put away! It wasn't even too hard. I'll have to do this again.
Posted by Dimple at 7:31 PM 1 comment: 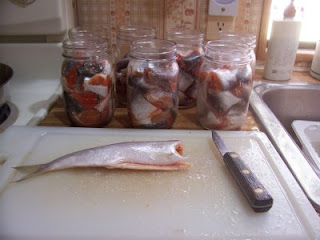 It's Sunday afternoon, and hot outside. Must be a good day to can fish...

I've never canned any kind of meat before. It's a little intimidating, because of the chance of dying from nasty germs. However, I have canned vegetables and fruits, I have directions that I got from a reliable online source, and I know how to use my pressure canner. I'm going for it!

Seven pints are in the canner, the pressure is stabilized, and the timing has begun. More to come, tune in later!
Posted by Dimple at 3:43 PM No comments:

I love thunderstorms. They begin quickly and end just as fast. I am awed by their beauty and power. They also make me think--especially when a hot one rolls through and knocks out the electricity!

That's what happened last Sunday about 11 PM. Wind blew, rain pelted down, lightning crackled and flashed, thunder boomed, and the power which runs our home ceased. There is nothing in the world so dark or quiet, even in the middle of a thunderstorm, as our home at night without power. It is unnerving. Once the light show ended I had a hard time sleeping. The alarm clock was off, what if we overslept? The pump in the well would not run, what if I needed to use the bathroom? When it was time to get up and prepare for work (which we do before dawn) did I have the camp stove where it belonged? What about the flashlight? I would doze for a little, then awake and wonder: Do we have power yet? No, not yet.

Our utility company is really very good. They work hard under sometimes terrible conditions to keep the lights on in our area. And they came through again, restoring the juice just about the time I had to get things ready for the day ahead. But I was exhausted, and at the early hour of 9:30 AM I had to take a nap. After that I was able to function, barely.

That evening it happened again. Light one second, dark the next. There wasn't even a storm (at least, not one we could see from our house) to explain it. Again the house was dark and quiet, but I was so tired that I slept anyway. When the battery-powered alarm went off, we were still in the dark. I set up the camp stove, made coffee by flashlight with water from a gallon jug, and waited. At about 4:20 the nightlights blinked, but it didn't last. An hour later, right after my husband left for work, the lights came on! Yay! .....Ten minutes later they were gone again. Boo! Finally, after I had left for my job, the power was restored. What a relief!

So I wonder what I have wondered before: If we had no electricity for a long time, what would we do? We have food in the freezer, would it spoil? How could that be prevented? What would we do about hauling water?

I don't really have a lot of answers. I believe I will have to learn how to can meat, and actually DO it. A generator might be an option: we have discussed getting one before, but so far have not. Our well is a relatively shallow one, we might be able to rig a pulley system and get water with a rope and bucket. But the answer which would be the best, and is the hardest to do, is to overcome my habit of believing that all will be well, and to quit trusting that what has always been will continue to be. Change sometimes happens quickly. Just watch a thunderstorm.
Posted by Dimple at 4:31 PM No comments:

The Start of Another Blog

Hello and welcome! I hope you are blessed today with the right weather, the right conversations, and the right accomplishments. God is good.

The question is, Why in the world would anyone, let alone me, want to start a blog? I don't write letters much, and am usually less than eloquent in any of my communication with anyone. But here I am. I hope to have my thoughts, as varied as they are, in one place. I hope that others will find some of them interesting, useful, or amusing.