I had an appointment today, so I drove into town. My route crosses a long bridge over a lake. As I came to the end of the crossing, I noticed a group of people with cameras standing together looking east toward the railroad bridge which is some distance away. I thought that they might be part of a photography class...

On the way home, I saw more people with cameras. They were scattered along the pedestrian bridge and again all looking toward the railroad bridge. I wondered some more about why, but it just was not a good place to stop. 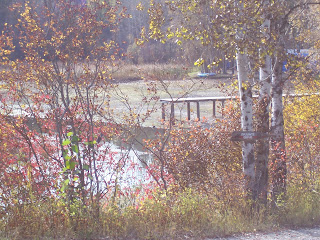 I turned off the highway down a scenic road thinking I'd stop and take some pictures. This is one.

Where this road crosses the railroad tracks there were cars parked along both sides and more people with cameras. I decided to ask a question or two, so I pulled over and rolled down my window. "Excuse me, what's going on?" I asked.
"There's a steam train coming along, and everyone wants to take a picture of it." I was told.
"Oh, thanks!" I said, and I drove off.
After crossing the tracks, I turned down the road which parallels the railroad for a couple of miles; it was my regular way home. But I had my camera, and a steam train doesn't go by every day...I started looking for likely places to pull off, places that might give a good view of a passing train. I didn't want to go too far, because I knew that this road crossed another near a railroad crossing, and I expected I would find lots of people there. I didn't want a lot of people in my pictures.
I found a nice spot, pulled over a little, got out and waited. I actually could hear the steam whistle in the distance. My view was through a few yellowing birch trees looking down to the tracks. I thought it would do.
As I was waiting, some other people, but not too many, stopped nearby and found themselves vantage points. Two cars stopped and the drivers asked me what was going on. Waiting was kind of fun!
Then I heard the train in earnest, whistle blowing and the rumble of wheels. I aimed. It got louder and louder.

Then suddenly, there it was! I took a shot, hesitated a moment, then took several more as an Amtrak passenger train, complete with observation car at the end, sped by. Here is what I saw, straight from the camera. I hope you enjoy the sight! 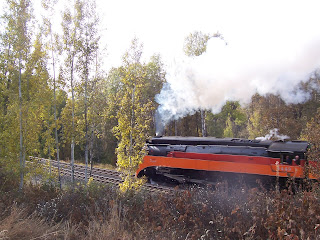 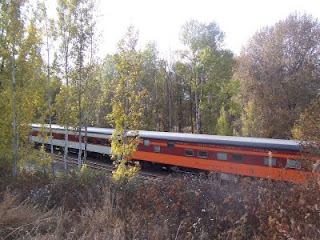 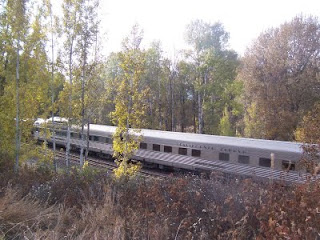 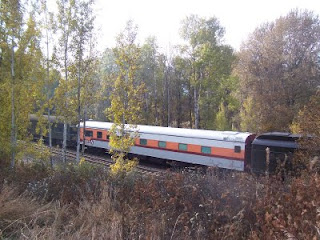 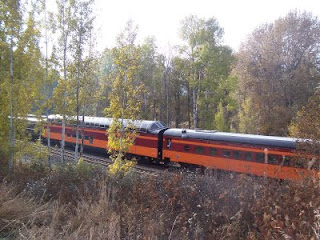 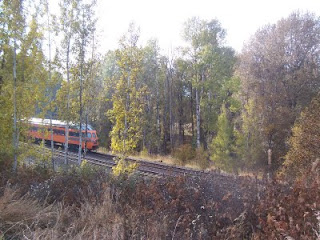 Oh wow, I know I would have stopped!
I bet those engineers were having a blast.
This was certainly a Ruby we don't see every Tuesday. :)
Great capture!

hello dimple...i just love this train.
from looking at the first picture and then traveling down the post, it just seems that i am in that train and that it is rushing from the north and is heading out west taking me to my beloved manitoba!
oh the reds and silver of that train and the lovely birch trees!...what could be better?!!
from terry[teresa]

Ilove trains!! what great shots of this red one and beautiful scenery too.
Happy Ruby Tuesday, mine is here.

What a fun thing to stumble across - lucky you for having your camera to hand.

Great pictures and the fall colors in the first one are beautiful! Hope your day goes well.

Duta, Thank you, I am honored and humbled by your compliment.

Aren't you lucky to have driven down there just in time? Great photos.

Love those steam engine trains. we have them quite a bit here. Lovely shots.

Great photos - I do like trains and it really stands out among the trees!

What a perfect timing and stopover! The view is so scenic, and I even love the color of the train!

RYC: The spore is of the lotus flower.

it is pretty...happy watery Wednesday.

What a lucky capture. We love trains of all types but the steam trains are the best.
I guess I left out an important piece on info on my Owen's Valley post, LA owns most of it but it is 200 miles to the north.

That was a wonderful opportunity for a great picture that was completely unplanned!
You didn't have all that waiting and you managed a perfect view!
Nuts in May

I think your post proves it's best to take your camera with you wherever you go!

Love the steam engine and cars. Wonderful series and thanks for sharing.

This train had the right colors to make a good pic! I like the 4th one the best - maybe because the green and orange alternate. What an event!